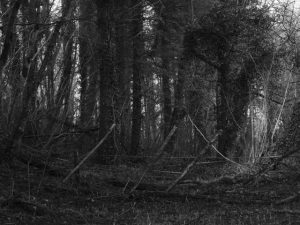 from an ongoing ‘borderlands’ project. It soon became clear The Black Pigs Dyke at

Lislea in County Fermanagh would become an important element of the enquiry, an

anchor in a real and imagined landscape.

This section of linear earthworks, a Bronze Age boundary, today runs parallel to the

enhances the location’s ‘genius loci’ and provides a space to imagine, question and

interpret the complexities of Irish identity. 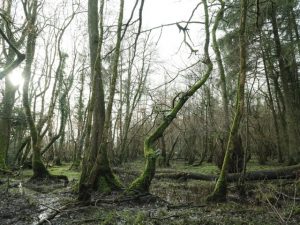 Nigel Swann was born in Portadown, Northern Ireland in 1962. He studied at the National College of

Art and Design in Dublin. After graduating in 1985 with a degree in Fine Art Sculpture he worked in

photography based industries in London. Returning to Ireland in 1997 he set up a production

company Swann Production to facilitate international photographic ‘shoots’ into the country. His

countries with a specific and recent focus on Hungary. His exhibition, The ‘Yellow Star Houses of

Budapest’ was exhibited at the Architectural Association Galleries, London in 2015 , the Irish

Architectural Archives, Dublin in 2017 and again in London in Nov 2017 at the Tate Britain

sponsored Urban Photo Festival. Work from this ongoing enquiry ‘ Borderlands’ has exhibited at the

2017 Getxophoto festival as part of a 6 person group exhibition ‘In Flux’ , curated by Shoair Mavlian

and in Serbia at Belgrade’s Parobrod Cultural Centre in March 2018. www.nigelswann.com