Patrick Kelly | The Land of Milk and Honey

during the 1970’s. There is a political and emotional ambivalence to what at first

seem to be natural landscapes as they exist today, but which have fragments and

traces hidden beneath the visible surface, disappearing from the landmark yet still

flowing through the collective memory — surviving on a latent, unseen level

somewhere between stasis and change… between wanting to remember and trying 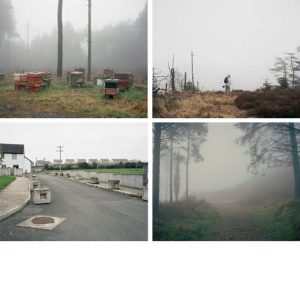 asks to what depth it can tell us about past and present human experience. In doing

so it reveals aspects of the social and political context of Northern Ireland, of

experience. It asks how an external environment can affect inner states of

consciousness and how history can manifest and conceal itself within a place.

experience can be communicated, to emotionally identify with my father and to

connect on a different level. The work addresses identity, memory and place and

asks how history is handed down from generation to generation, contrasting the

existing in one situation.

Paddy Kelly is a Northern Irish artist. He graduated with a BA (Hons) from Ulster University. His

work attempts to express and explore how thought, feeling and individual experience can be

communicated and distilled through the photograph. He is interested in situations that are

experience; in particular the borders between the two. He has exhibited widely and his clients include