Sean Hillen’s continues the photo montage tradition of political artists, including the

influential 1930’s artist John Heartfield. This influence can be seen especially in

Hillen’s more political montages of the Troubles in Northern Ireland. His Photo

Montage work concerned itself with the contradictions, the black comedies, and the

myths related to the Northern Conflict.

– the idea that we are all, by human nature, severely limited in our comprehension

and accreted and which forms our ‘reality tunnel’ – and that our job, to become

more human, may be to look outside of the cave and beyond the flickering shadows.” 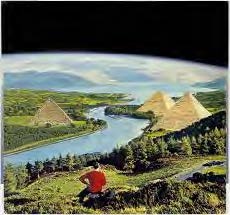 everyday postcard visuals, mixed with a fantastical other world. Most of these highly

decorative collages, showing landmarks from around Ireland, are no bigger than a

postcard. These works are partly influenced by the famous picture postcards

touristic shots to create an altogether different and complex image.

Seán Hillen was born in Newry. He studied at Belfast College of Art, London College of Printing

and the Slade School of Fine Art. His early work, documenting the conflict in Northern

Ireland can be seen in his book ‘Melancholy Witness’. These works were the basis for

around Ireland. His works appears in collections including: Newry & Mourne Museum; Allied