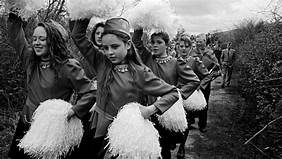 of the controversial Anglo-Irish Agreement was an extremely brave, and some would

suggest foolhardy, undertaking but it is one that photographer Tony O’Shea and

aware of the significance of the border to local people, how it means something

concrete. Whereas, in Dublin, it’s something of an idea”, O’Shea tells Murmur. “I

was photographing various aspects of republicanism and, rightly or wrongly, I saw it 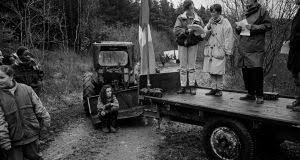 O’Shea is one of Ireland’s most respected photojournalists. His work has appeared in

a wide variety of newspapers and magazines including the Sunday Business Post, Sunday

Times magazine, the Guardian, In Dublin and Libération. ‘Bad Blood: A Walk Along the Irish

Macmillan. His book ‘Dubliners’ is one of the most respected photo books from the 1990’s.

Most recently his work ‘Border Roads’, ‘Italia 90’ and ‘Never Forget’ and Italia has been

published as a series of Café Royal books. Tony O’Shea is currently artist in residence in the

Gallery of Photography’s artist digital studio where he is digitizing his extensive archive. 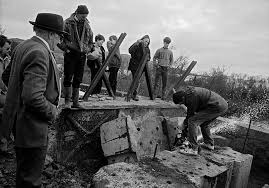